Sometimes called ‘the father of palliative care in India’, Dr M.R. Rajagopal was in Edinburgh this week as guest of honour at a screening of a documentary on the achievements of his own extraordinary life.  Entitled, "Hippocratic: 18 Experiments in Gently Shaking the World", it was hosted by EMMS International.  The rapt audience, who had gathered in Royal College of Physicians, were soon to learn the truth of an introduction that described Dr. Raj as: “passionate, not timid; gentle, but effective.”

Originally from Kerala, in the south of India where he started his pioneering work, he is now the Chairman of one of the world’s largest networks of palliative care provision – Pallium India.  Long time friend of Cairdeas, he has a close personal and working relationship with Cairdeas’ Medical Director, Dr. Mhoira Leng, and Cairdeas recently supported his visit to Uganda as the keynote speaker at their 10th anniversary conference.

Both his sincerity and passion are clear in everything he says and does.  “Pain relief medication isthere,”he told us, “it’s just not getting to those who need it.”

He spoke openly and honestly about the significance of the Hippocratic Oath, and how its principles underpin and drive his work.  He quoted elements of the oath verbatim, wrapping himself in its mantra of care and dedication:“I will remember that there is art to medicine as well as science, and that warmth, sympathy, and understanding may outweigh the surgeon's knife or the chemist's drug.  Above all, I must not play at God.”

Without doubt, access to pain relief medication was highlighted as an enormous issue but so, he told us, was one’s attitude to serving their patients. “We have the power to destroy with a few words, or to lift up with a few words.”   He guarded against the medical profession becoming trapped in their heads and detached from their hearts as he emphasised that the treatment of the person is as important as the treatment of the pain.

Again and again, he stressed how ‘good’ palliative care must treat the patient with care and respect, not simply treating them as a receptacle and ‘attacking’ a disease.  Human beings, he told us, are much more than just containers of disease.  In a room filled with doctors and nurses he reminded those present from the caring profession that they are in a position of ‘huge privilege’; but one that requires empathy, one that asks you to walk in the shoes of another, one that requires you to understand the suffering of fellow man.

Over the years Dr. Raj has drawn much inspiration from his fellow countryman, Mahatma Gandhi, whom he often quoted.  “Recall the face of the poorest and weakest man you have seen, and ask yourself if this step you contemplate is going to be any use to him.”  This line from Gandhi informs Dr. Raj’s decision making every time as he strives to serve those in the depths of poverty with nothing; a poverty, he told us, which Gandhi called, “the worst form of violence.” 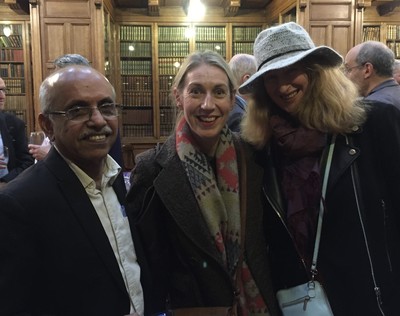 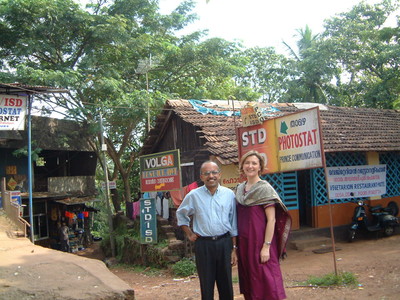 Dr. Mhoira Leng of Cairdeas and Dr. M.R. Rajagopal of Pallium India, pictured a few years back in India