Godfrey knew he wanted to become a nurse when his father became sick and he didn’t know how to care for him. Living in Adjumani district in Northern Uganda, Godfrey studied to be a nurse. His favourite part of the job was speaking to the patients, particularly those with chronic illness. These patients seemed to have a different perspective on life; a unique sort of peace. He took part in a palliative care leadership course in the district facilitated by Cairdeas. Godfrey now volunteers for Cairdeas partner, Peace Hospice Adjumani. Peace Hospice works to provide palliative care services in the refugee settlements and to host populations.

I met Godfrey on a recent trip to Uganda. As Operations Director of Cairdeas I had the opportunity to visit Uganda to meet partners, visit patients and gain a deeper understanding of how the work of Cairdeas is empowering communities to provide palliative care to those in need.

I accompanied Godfrey to a home visit in Adjumani in Northern Uganda. Esther (name has been changed) was suffering from advanced cervical cancer. She was being looked after by her sisters and visited by the Peace Hospice team every two weeks. Esther was on high doses of morphine to manage the pain but was still experiencing some symptoms and side effects of the morphine. Godfrey gave Esther some advice on managing these symptoms, such as waiting an hour after taking the morphine and before eating to avoid nausea. As well as enquiring about her medication and symptoms, Godfrey checked in on the care Esther was receiving from her family and how she was feeling emotionally and spiritually. She explained that she was being cared for by her family, but also that she knew she wouldn’t have to feel the stress of loneliness because the hospice team will take care of her. Before we left Esther took the opportunity to practice her English with me. “At least I have laughed for today” she said to Godfrey in Madi as we left.

We then went onto the first refugee settlement, Pagirinya. Village Health Teams (VHTs) have been trained to identify patients with palliative needs and refer them to the Peace Hospice team. Godfrey and I waited under the shade of a tree as the VHT went to find the patient we were there to see. As we sat there, I was struck by how well established the settlement was.

Uganda has welcomed around 1.3 million refugees – the third largest refugee population in the world. A recent episode of the BBC documentary, The Displaced, followed Ashley John-Baptiste as he met some of the refugees settling in Northern Uganda. “Instead of fighting the tide of displacement, Uganda has become renowned for its welcoming refugee policies”. The settlements I saw weren’t dissimilar to the host villages – mud hut homes, vegetable patches, clothes hanging out to dry, goats and other animals running about. When being forced to leave one’s home, those crossing the border into Uganda are welcomed with a dignified space to set up camp until it is safe to return home.

The first patient we saw was a man with painful swelling in his legs. The swelling had started in his left leg and spread to the right. He was receiving pain killers from the Health Centre which is run by UNHCR – the United Nations refugee agency. He had been offered a biopsy but couldn’t afford the cost of the results. He didn’t feel he was getting any support from the community. “You are not alone, we are here for you” Godfrey assured him. The patient may be transferred to a hospital in the nearest city, but the Peace Hospice team will ensure he doesn’t slip under the radar and will support him in whatever way they can. Finance is often one of the biggest challenges in these situations, and unfortunately Peace Hospice itself struggles with this. As a key partner, Cairdeas hopes to be able to support them through joint funded projects.

The second patient, Pal, was a lady with advanced rheumatoid arthritis. Pal couldn’t stand without support from her daughter. She had recently been walking with a stick, but the stick had broken, causing her to fall and break her hip. Godfrey promised to help the family by sourcing a stretcher or wheelchair to make it easier to move their mother around. He prescribed some medication and wrote a note to the nearby health centre asking them to provide further support for Pal. “I will not forget mama, I will not leave her” Godfrey reassured Pal’s children.

It was an eye-opening experience visiting both the Adjumani host communities and the refugee settlements. I was given an insight into how a country can successfully welcome people who have had to flee their home countries, offering refuge and dignity in their displacement. It was wonderful to see the work of Peace Hospice and the support they are offering to those in need. They were able to offer assurance that the patients would not be left to suffer, treating their symptoms and seeking further health care from the relevant organisations. Godfrey gave each patient time and space to share their worries, making them feel cared for and valued as an individual.

Please remember Peace Hospice as they face the Covid-19 crisis. Adjumani hospital where they are based has confirmed a first case of the virus and, as yet, there is no evidence of it spreading to the refugee settlements. Executive Director of Peace Hospice and key Cairdeas partner, Vicky Opia has been appointed as the lead for psychosocial care at Adjumani Hospital. Our thoughts and prayers go out to Vicky, Godfrey, and all those working to care for both host and refugee populations in Adjumani at this time. 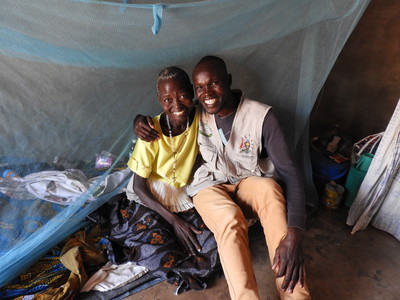 Godfrey with our first patient, Esther 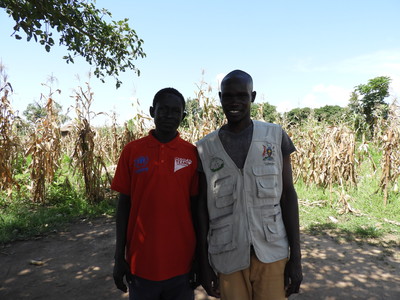 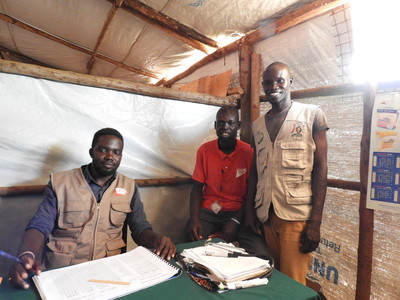 Godfrey with VHTs and Healthcare workers in the refugee camp