Dr Dave Fearon leads the Cairdeas Sahara project which was established in 2014. The project is one of the first palliative care services in West Africa, where health workers are unfamiliar with even the basic principles of holistic palliative care. Often, pain and other burdensome symptoms are left ignored or even denied by health workers. Fortunately in recent years there have been huge strides in progress, particularly in pain management. Dave reports on the most recent step forward: access to morphine tablets.

As many of you will know, severe pain is a common problem for people with life-limiting conditions anywhere in the world. It is no different here in the Sahara. The majority of our patients at Cairdeas Sahara in Mauritania have advanced cancer and pain. Thankfully we have a good working relationship with the national cancer centre where morphine is available. Up until recently it was only available in injection form or long-acting tablets, which was not ideal. There was no liquid or tablets which worked quickly, which are very useful when starting morphine and for ‘break through’ pain relief to use any time of day or night. We have been asking for this for several years, but it was not until a new director, oncologist and paediatrician Dr Benina, was appointed at the end of 2018 that we have seen change. We now have a short acting morphine tablet. She is not yet satisfied and is still pushing for an oral suspension or liquid form, especially for her young cancer patients.

We have recently been invited by the cancer centre to train the doctors on how to use these new tablets. In contrast to many countries where doctors are reluctant to prescribe morphine, here we have a different problem, the overuse of morphine injections. Several of our patients have been treated very liberally with morphine injections whenever they have attended the cancer centre. The doctor gives them a morphine injection for their pain. They really like these injections because they work very quickly (although the effects wear off quickly as well), and like many Mauritanians they think injections are more powerful than little tablets.

The Cairdeas Sahara team are now working with five or six patients who are in this situation, of switching from the injections to the tablet format. NDiaye, the lead nurse is doing a great job and is being stretched in his communication skills. Importantly, the cancer doctors are fully supportive of our work and are now aware of how to start oral morphine. We can already seen the benefits for our patients.

You can find out more about the Cairdeas Sahara project here. 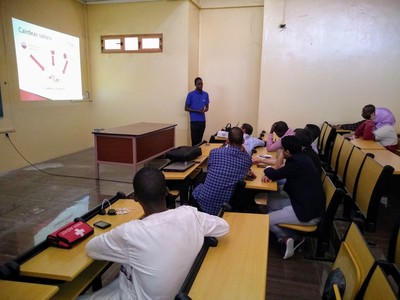 Morphine training with doctors at the cancer centre